published an overview of the role of medicare among americans who are eligible for both medicare and medicaid.

sure am glad egypt doesn't have nuclear weapons.  aren't you?

bought a cell phone once.  i was twenty and lived out of my car that summer.  i figure you should have a home or a cell, but not both.

found my old quote, "music and blood are not so different."  and also one from the prophet muhammad, "i have a good life here, i can't deny it.  but it has to change."

caught up with britt over nearby vietnamese cuisine.

blame the u.s. deficit on our aging population more than on any toxic politicking.

celebrated mozart's birthday at the embassy of austria.  notice our entertainers' ages. 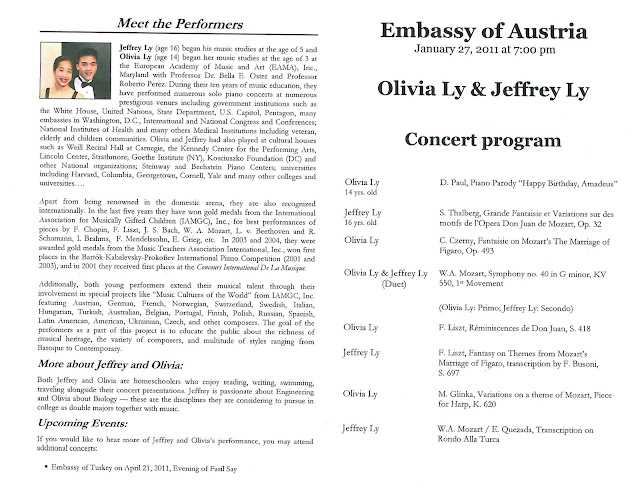 read the hard way to peace, a surprisingly relevant © 1962 book about the future of the cold war and the rational russian perspective..


after all, as the russians see it, only one nation has ever employed an atomic bomb.
we really think that the russians are out to destroy us; we find quotations in lenin about "just wars against capitalism" and remember khrushchev's saying that communism will bury us.  we do not realize that the russians find quotations in dulles and eisenhower speeches and writings that refer to a "crusade" against the evil of communism and to our intentions to "liberate" china, eastern europe, and the russian people...we feel that we defend freedom and they enslave people; they feel that we are capitalist exploiters and warmongers while they are carriers of social justice, the basis of true freedom as they see it.
..the author discusses the need to eliminate nuclear arsenals..
a single plane can now deliver a bomb with an explosive power as large as the total amount of high-power explosives dropped on germany and japan in all of world war ii.
human history can be recounted as a series of interludes between wars.
the age of big bombs on a small planet

it takes one commander of a polaris submarine to shoot sixteen nuclear bombs into russia; it takes two madmen per minuteman to send a nuclear bomb from a home base to moscow..we have already suffered several narrow escapes from nuclear war caused by false alarm.  in the recent past, the alert was sounded because american radar screens recorded the rising of the moon, because meteors fell, because a flock of geese veered in their winter flight
negotiations were going along smoothly until one of the knights was stung by an asp and drew his sword to kill the reptile.  the others saw the sword being drawn and immediately fell upon each other.  a tremendous slaughter ensued..when the battle was over everybody except king arthur, mordred, and a couple of knights lay dead.
..and other bits of hysteria..
assume now that a man gets sick from a cause other than radiation.  not believing this, his morale begins to drop.  you look at his meter and say, "you have received only ten roentgens, why are you vomiting?  pull yourself together and get to work."
in nuclear war the odds are almost overwhelmingly in favor of the attacker
in 1955, 55 percent of the american people were willing to engage in atomic war in order not to lose quemoy and matsu.

the american people do not know what war means..its people have built up an enormous conviction of invincibility.
to drop atomic bombs on hiroshima and nagasaki, before the american public even knew that such bombs existed.

..reviews each possible strategy, argues for gradualism..
we need not strip ourselves naked to show the other party that we are willing to talk with him.
it may never satisfy the idealist, especially the supporters of unilateral or multilateral disarmament, since it requires that some arms and bombs be kept for a considerable length of time; but unlike more appealing programs, it has a chance to be agreed upon and to be carried out.  unlike multideterrance and arms control, it leads to disarmament.
as military researchers are transferred to peaceful work, as weapons factories begin to produce consumer goods, and as armament appropriations are used to build schools, we create a large variety of new interests vested in peace and we reduce the vested interests in the arms race.

gradualism offers the world a slow, hard but safe way - i believe the only feasible one - out of the continuous slide into the thermonuclear furnace.
..talks about cuba, predicts iran's revolution, and reminds us how to behave.
this communist success, thousands of miles from the closest communist country and only ninety miles from the united states, underscores the point that ideology and political movements know no distance and are not "deterred" by maginot lines or sac bombers.
iran itself, after $1.1 billion american military and economic aid, is still economically underdeveloped, ruled by an oligarchic landed aristocracy and a tyrannical shah, widely penetrated by communists and quite ready for a revolution.
linus pauling's reformulation of the golden rule: "do unto others 20 percent better than you expect them to do unto you, to correct for subjective error."
think the scale of destruction posed by these weapons ought to dwarf any fears of a conventional bomb from an enemy like al qaeda.  though the cold war might be over, this book still provides considerable insight into the thought-processes of modern-day rivals like india and pakistan.

also started reading the author's blog, from which i intend to steal the line, "other than that, mrs. lincoln, how did you like the play?"