gave the dupont circle sports bars a chance on friday; front page for happy hour, buffalo billiards into the night. the fire alarm broke up our evening at the latter, so we went to the cosi across the street, celebrating being forced out without paying the bill. an hour later, one of us remembered that our credit card was still there on the tab. we cut our losses with a game of shuffle-board.

hosted a really likeable brazilian physicist couchsurfer saturday - tuesday. he was here for the neuroscience conference, presenting something about primate vs. rodent brain fold-length. i was more interested in knowing that i've got a place to crash in rio, should the mood strike me.

celebrated a friend's birthday on saturday with my first sake bomb. i was terrified that the shot glass wouldn't fall into the (japanese) beer. this might be a bonding experience, but it doesn't make friends with anyone at nearby tables at the restaurant. missed the 18th street lounge's -no cover before 10pm- by thirty seconds, then enjoyed some deafening house music. 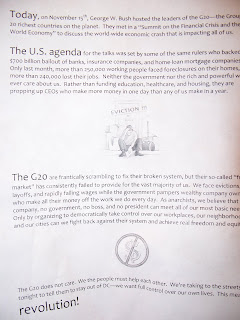 received a revolutionary flyer on our way home from the bar. about ten cop cars were stationed on my street, no sirens, but full strobe, the eeriest setting. i asked different cops what they were doing: the first said, "i don't talk to the press," the second, "talk to the captain," the third and most reasonable, "there's a protest or something, i don't know."

ate chipotle. bad for the heart, good for the soul.

fell in love with mozarella all over again. also decided that kurt vonnegut was mark twain reincarnate.

watched a discussion between health policy people from heritage and brookings: they agreed on more than they disagreed, made me optimistic about the future of my field.

played poker with SAIS friends thursday night, into friday morning. hookah on the side, blues in the background, well-worth the ten dollars i lost. pretty hard to bluff when you're surrounded by diplomats.
Newer Post Older Post Home