debated whether or not to take malaria medication (http://www.rollbackmalaria.org/countryaction/ethiopia.html).

listened to hhs secretary leavitt advocate for health diplomacy. he outlined our failure to build soft power from taxpayer-funded philanthropies, and convincingly argued that the next administration should attach all international health care delivery to a brand, like usaid's slogan 'from the american people'. he discussed the successes of castro's doctor-export program (google 'cuban doctors') and hezbollah's clinic-building in the wake of the last lebanese war; he betrayed his bias when he abruptly concluded that the tide of leftist leaders in latin america highlighted the fragility of these democracies. constitution-trampling is non-partisan (http://www.as-coa.org/article.php?id=1377), thanks.

attended a friend's party. seemed pretty standard until the host began shattering plates on the floor. apparently a greek thing, i'd love to see them christen their ships. 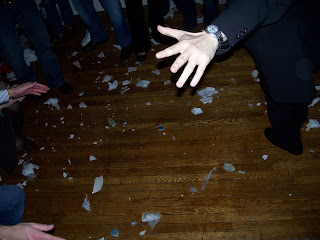 drove out to gunpowder falls state park for a birthday party. they had rented a cottage for the night, so we ate eggplant lasagna, played board games, and sang karaoke until three, then curled up wherever we could find a semi-soft surface. i've stayed in state park-run cabins before, always satisfying. full-moon bonfire-staring works as well as dinner plate-smashing when you're searching for something primal. 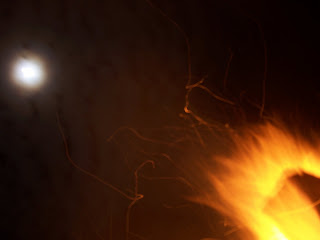 enjoyed the company of a friend who had just returned from a voyage through south africa, and also a brazilian couchsurfer who just concluded a semester law exchange at wvu. notice the apartment is 65% luggage, 35% my possessions. 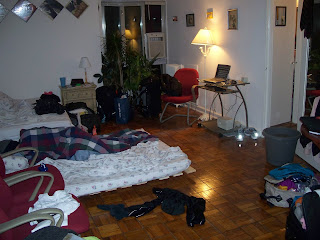 ran for thirty-five minutes straight. kind of a big deal.

visited the national zoo's holiday light show. washington exploits the 'we have a panda' edge on the logo, in the gift shops, and now apparently as winter festival bubble-boys. this toddler had fun, but thirty seconds later, the kid in the background stroller got wheeled up closer and began crying and shrieking; seemed like a reasonable response to a mascot in a snow globe. 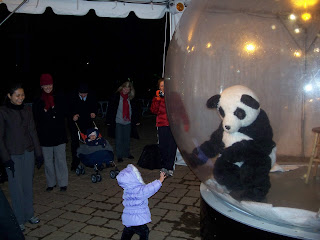